Lonely Planet and other travel guides recommend atraveo
Dear customers,
Due to a very high number of e-mails we are currently only reachable by phone to a limited extent. You can reach our customer service at +49 211 668878130 Monday to Friday between 10:00 and 12:00 (CET) and between 14:00 und 16:00 (CET).
Further information and answers to frequently asked questions can be found here.
display
Share
https://www.atraveo.com/rovinj
Link for copy
Map section has been altered.
Reload offers
Reload automatically
Why aren't all the offers displayed?
map

A holiday house in Rovinj costs on average USD 614 in the cheap travel period and USD 1,177 in the peak season per week. These details are of course in relation to the house and not per person as well as includes the obligatory additional charges.

This is what holiday rental customers wrote about Rovinj


This is how holiday rental owners described Rovinj

From the seaside, Rovinj-Rovigno is protected by the high rocky coast and walls of the houses built on the cliffs, and from the landside it is sheltered by solid bulwarks. All of it still preserved! Once you step through the Balbi Arch and enter the old town, you will find ...
show more yourselves in a different time dimension. All its lovely little streets will take you to the top of a small hill, where you will find the biggest and most significant monument in town - the church of St. Euphemia (pop. Fuma). This baroque building made in Venetian style was dedicated to the saint and martyr whose sarcophagus, according to a legend, was miraculously washed ashore somewhere around 800. Holiday of St. Fuma takes place in the middle of September and is one of the most important and greatest spontaneous folk assemblings in Istria. Rovinj-Rovigno is then filled with pilgrims from Istria, the littoral and other parts of the country. If you happen to be in town at that time, make sure not to miss the opportunity to experience this traditional holiday, because it will truly delight you.
show less
source: Lukić
Villa is situated in peaceful luxury suburb of Rovinj, only 3 km from the city center.
you can enjoy in privacy and still if you wish for a bit of "city life" you are less than 10 min with a car in center enjoying restaurants, bars, concerts, events, sightseeing...

Shop ...
show more is 2 km away and supermarket 5km

Owing the legacy of the rich history and particular location, Rovinj is one of the most attractive and most beautiful towns on the Mediterranean. The city radiates with a unique beauty which attracts visitors from all over the world.

We are looking forward to see you.
source: Lutman Poropat
Nada Apartments are located in the town of Rovinj, Valbruna suburbs. Near the beach Villas Rubin with pools for adults and children. The apartments are situated 15 minutes from the city by pleasant walk. Near is the forest park Punta Corrente and entertainment center Monvi. There is a shop, pharmacy, ...
show more bakery, newsstand. Our offer consists of double room and quadruple room apartments. Apartments are new and with AC. Large terraces offers a beautiful view. Secured parking, garage, storage for bicycles. Apartment cleaning for free, the tourist tax included in price. Contact us for pricing and animals.
show less
source: Dujmovic Lukež
Rovinj is located on the western coast of Istria, the largest peninsula of the Adriatic, is only a one hour drive from Trieste, 270 km from Zagreb, a little more than 500 km away from Vienna, and seven hundred from Munich.

The climate is Mediterranean, the average temperature in January is 4.8 C, while the average in July is 22.3 C. The mean temperature is 16.6 C, and in summer rises to 26, sometimes 27 degrees. The average number of hours of sunshine per year is 2,393, while the humidity is 73%.

The citizens of Rovinj has fifteen thousand, mostly dealing with tourism, fishing, agriculture, wine and viticulture. The town has a rich history, interesting architecture, beautiful natural resources and industrious people who are certainly worth a visit.

Rovinj is also one of the most famous tourist centers in Istria and Croatian, which is visited by many foreign and local guests. Accomodation capacities are diverse, reaching from campsites, apartments and rooms to smaller board to the high-class hotels.
show less
source: Endrih
ROVINJ - is a beautiful small town situated on the western coast of Istrian peninsula. Because of its mild climat, a lot of sunny days, warm sea, attractive scenary as well as its historical monuments and the old town, it is popular meeting-place of all kind of artists - painters, ...
show more writers, actors- during the whole year. The islands and small islands (13) of Rovinj archipelag, a numerous baies and ports, Lim-Fjord, National park "Zlatni rt" (Golgen cape), yachts-ports-marina, sports, dancing-evenings etc. have made Rovinj one of the most attractive tourist centers.
show less
source: Zuvela
The Croatian islands are especially famous for their beaches, which are well-known throughout Europe. Veliki Brijun Island is the largest of the Brijuni islands. It lies 2 Km from the Croatian coastline and just south of the second largest island in the archipelago, known as Mali Brijun. This has been ...
show more a Croatian National Park since 1983, boasting a rich fauna of exotic plants, including many mangroves.
Rob is the island furthest north of Dalmatia, full of beaches and particularly popular with tourists due to its historical town center.
Krk is the largest island in Croatia, situated a short distance from the city of Rijeka. Thanks to its mild climate, there are vines and olive trees which produce oil and wine of excellent quality.


Position of Camping Porton Biondi: a walk of about 1000 mt leads you to the center of Rovinj, one of the most romantic cities of Croatia with its historical centre, the characteristic houses of the Reinassance and the Baroque Epoque and the old for-tress which wall up the city. Pula, the biggest city of Istria, with its famous roman amphitheater and its fortress, built in 1630, is only 42 km away. At only 20 km you can visit the promenade, the caves and the roman and me-dieval ruins of Porec.
show less
source: Arena Tourist s.r.l. - Aqua Camp

Photos of the town 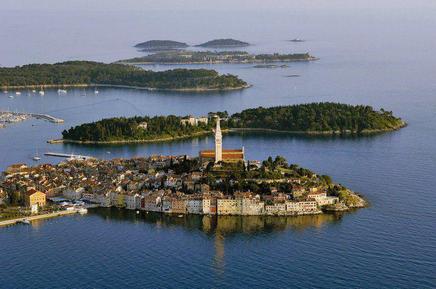 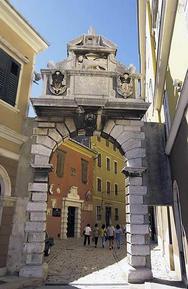 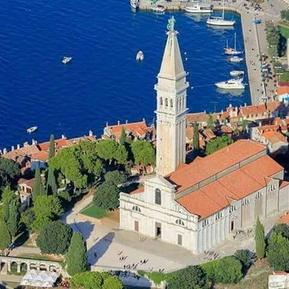 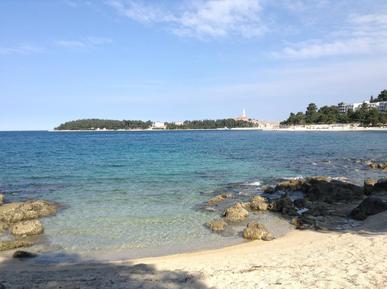